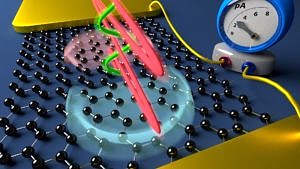 In future, electronics will be controlled via light waves instead of voltage signals: This is the goal of physicists worldwide. The advantage: Electromagnetic waves of light oscillate at the petahertz frequency. This means that future computers could be a million times faster than the current generation. FAU scientists have now come one step closer to this goal: They have succeeded in precisely controlling electrons in graphene with ultra-short laser pulses.